“Music is the wine that fills the cup of silence.” 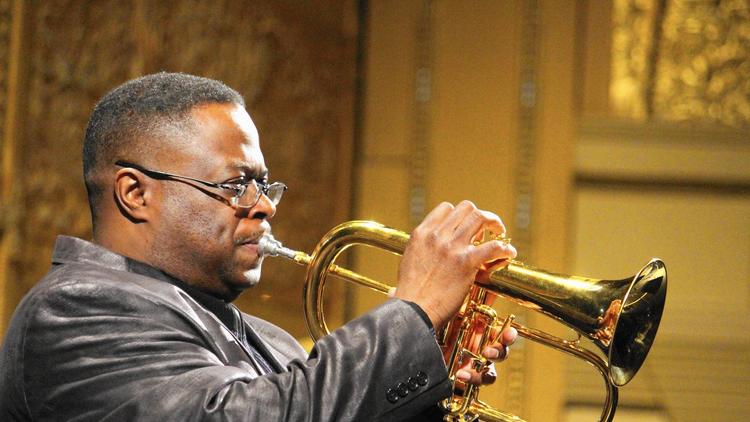 Orbert Davis is a storyteller.

He has written works illuminating the life of Nelson Mandela, New Orleans after Katrina, the reversal of the Chicago River, even the history of “DuSable to Obama: Chicago’s Black Metropolis.”

Soon, his latest effort will debut. “Soul Migration” draws on the stories of some of the 6 million African Americans who took part in what is known as the Great Migration, moving from the rural south to the industrial north beginning a century ago.

Do not reach for your Kindle. Davis’ stories aren’t read, but heard — and “Soul Migration” will premiere at 8 p.m. Sept. 1 at the Jay Pritzker Pavilion, as the featured performance of the opening evening of the 2016 Chicago Jazz Festival.

The Beverly resident was commissioned to do the work by the Jazz Institute of Chicago’s executive director, Lauren Deutsch, a cherished colleague who put Davis’ then-fledgling Chicago Jazz Philharmonic — a 55-piece fusion of jazz and classical styles — on the Jazz Festival stage in 2004.

“When she called, it wasn’t like getting an assignment,” Davis said. “It was a friend calling and saying, ‘What do you think about doing this?'”

Davis thought quite a lot of doing, and in doing, the piece. He distilled the effort simply, saying, “We want to hit people in the soul.”

Indeed, he said, the titular “Soul” refers not to the style of music.

“It’s a consciousness of a people,” he said. “I didn’t want the piece to report history, but to sort of be an epic that starts in the present tense and flashes back to the past and forward to the future.”

He accomplishes that musically apart from the Jazz Philharmonic, which has breathed life into many of his previous creations with him as conductor.

“My goal has been to get back to my roots as a trumpet player,” he said.

The 56-year-old has already gotten back to his roots, in a manner of speaking, by moving to Beverly 11 years ago. A native of Momence, he was drawn to Beverly’s quiet streets.

“My wife and I both grew up in neighborhoods,” he said. “Living in the city, that’s what I missed about growing up in Momence.

“We’re able to walk around in the neighborhood, walk to restaurants, walk places where strangers actually speak to each other — and yes, it’s quiet. The rest of my life is so loud.”

Perhaps that’s because Davis hears so many sounds. Even while downsizing to a “modern jazz format” and its handful of players, Davis is fusing styles as he has for more than a decade with the Jazz Philharmonic.

“The band itself will be an acoustic band and an electric band at the same time,” he said. “The audience will be able to tell that we’ve moved to a different time.

The electric bassist, Ron Hall, is reuniting on the stage with Davis for the first time since 1988, when their band “Grand Staff” — Davis said they were huge in Kankakee — broke up.

“It was a good band,” Davis said. “I learned how to compose through those years.”

“He’s going to write a narrative on, ‘Alright, we’ve celebrated. But what do we do now?'” Davis said.

Davis will keep composing and playing.

“Music has the power of grabbing us long enough to pay attention, before we can turn away,” he said. “Stop. Listen. Feel before the scene changes.”

Davis is a founder of Discover Music: Discover Life, a program of arts education that currently works with children in 15 Chicago-area schools, teaching reading and math through music concepts. In that work, he frequently meets with politicians of every stripe.

In early August, he said, he was at a conference of state legislators. He and a legislator from a southern state chatted at length, amiably and with passion about music, before discovering their political views were more than a little different, giving him hope that “for once the country can maybe not be so polarized.”

“We all have so much more to talk about in the ways that we’re alike,” he said. “I get excited by that.”

Phil Arvia is a freelance reporter for the Daily Southtown.